Some people have wild parties for their birthday or go out for dinner, movie, and maybe see some music. Not my Jeff; it was a quiet night with the snakes for him.

We set out after work to check on our friend Bane (adult male Arizona black rattlesnake), who was last seen headed toward Secret Springs. At a bend in the nature trail we call snake corner, we encountered a western diamond-backed rattlesnake.

Jeff actually walked right by him and I stepped right in front of him before I noticed him. The snake didn’t seem to care: he never rattled and of course didn’t strike, as that is their last line of defense.

That is my footprint circled in red on the left (snake just off trail on the right).

And Bane was nearby in a swampy area, in one of those perfect hunting postures, in the mud, against a downed log.

After our snake walk it was time for homemade pizza, garden salad (from our garden at Muleshoe), and raw coconut lime pie. A delicious ending to a delightful birthday.

Especially of late, this blog appears to be mainly about me and my adventures with rattlesnakes. But none of this would be possible without my fantastic partner in crime, who is just as crazy about snakes and nature as I am (maybe even more so).

Jeff taking data, while balancing a GPS on his head

Guess I’m just a sucker for unlikeables 🙂 Back in high school and the early part of my college career, I volunteered at Raptor Rehabilitation of Kentucky and fell in love with vultures. We called them nature’s garbage men (and women) because they have the important, but very un-glamourous job, of cleaning up after everyone else (they’re scavengers). Compared to the hawks, owls, eagles, and falcons I worked with, vultures were brilliant and inquisitive.

One day I made a comment in an online forum that working with California condors would be the coolest job ever (because condors are GIANT vultures). That led to a job with the Peregrine Fund working on the condor reintroduction project in northern Arizona, and ultimately to the end of my bird career. I met my first rattlesnakes that year and haven’t really looked back at birds since.

I still enjoy seeing vultures and here at Muleshoe we have a huge roost of turkey vultures in Bass Canyon. You can see them flying in around sunset and I’ve been over there a few times to see them settle in for the night.

But the other morning we were over there early enough to see them sunning themselves in preparation for their day of soaring on thermals and looking for (smelling actually) food.

Bane, a creature of habit

Although Bane (adult male Arizona black rattlesnake) didn’t enter our radio-telemetry study until 5 August 2012, we first met him during last year’s Spring Snake Count. I had led a group of Snake Counters to Secret Springs, a warm-spring-fed pond that was formerly a cattle tank. One of the Snake Counters encountered Bane on the far side of the pond, where he was drinking.

Since we began tracking Bane with radio-telemetry in August, he has not returned to Secret Springs. He spent most of this spring near the Nature Trail, making him the perfect snake to track with preserve visitors. Anyone who wanted to track a rattlesnake this spring April has met Bane.

Save the Frogs Day attendees checking out Bane, 27 April 2013.

Snake Count weekend was no different. We visited Bane two or three times with Snake Counters, who got to meet Muleshoe’s largest Arizona black rattlesnake. As usual, he was just off the Nature Trail on Friday and Saturday. Sunday afternoon (19 May), Bane’s signal was erratic, as if he was moving. And he was. He had crossed Hot Springs Wash and was cruising alongside the Nature Trail toward Secret Springs!

It’s May in Arizona, which means it’s hot and dry. Guess Bane is thirsty again 🙂

I’ll end this week’s roundup of snakes with the snake that started my obsession with rattlesnakes, black-tailed rattlesnakes (Crotalus molossus, hereafter blacktails).

Many, many years ago, I attended the International Herpetological Symposium just for fun, as the only reptiles I worked with at the time were of the feathered variety. I met (who is now) my oldest and dearest friend at that meeting, who was key in reawakening my lifelong love of snakes. And there was a presentation that blew my mind and changed the course of my life forever. Harry Greene talked about his black-tail project and in particular that they take care of their kids.

Snakes? Take care of their kids? So long birds!

It was five more years before I started my first rattlesnake project and I haven’t looked back since. I still haven’t seen parental care in blacktails, but I have gotten to see them do some other really cool things.

Jaydin (male) in a tree.

Persephone (female) in a tree.

Timelapse video of Jaydin courting Persephone (one day of that courtship).

Jaydin in combat with Marty over Persephone.

Maybe this will be the year, 15 years later, that I finally get to see a blacktail family (Persephone, please?).

I’ve already dedicated a post to gophersnakes and how I adore them, but since we’re almost certain to see one this weekend, they deserve another mention. 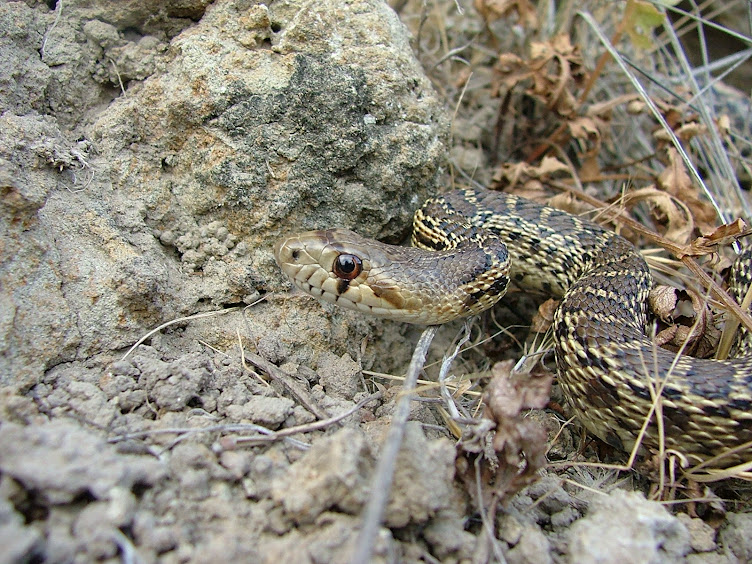 Gophersnakes (Pituophis catenifer), or a close relative (bullsnakes, pine snakes), are found nearly throughout the United States. They can be very large (up to 6 feet in length!), but are perfectly harmless and usually quite docile. They mostly eat mammals, which is probably why they’re called gophersnakes.

Like most colubrids, their behavior can be difficult to observe in the wild. Gophersnakes have many predators, including humans, so they usually stop what they’re doing and flee in our presence. But one day a couple years ago Jeff and I got extremely lucky. We came across a trio of gophersnakes, two males and a female, and got to observe combat, mate searching, and courtship – it was pretty amazing! I won’t retell the entire story, because you can read it here and here, but here are a few highlights:

Olive Oyl maintains a wary eye while Popeye focuses on his potential partner.


The first battle between Bluto and Popeye over Olive Oyl.

People perceive rattlesnakes as mean and violent, but when you compare courtship and combat, rattlesnakes seem gentler and kinder than gophersnakes (or most any other animal).

The first Snake Counters have arrived at the preserve and were immediately welcomed by one of our resident diamondback females, Forrestine. Join us!

By far the most commonly seen snakes at Muleshoe headquarters, and most places where they live, are western diamond-backed rattlesnakes (Crotalus atrox, hereafter diamondbacks). They are wide-ranging, found in a variety of habitats, and eat pretty much anything that fits in their mouth. They also don’t seem to mind humans moving into their space; several at Muleshoe spend most of their active season at headquarters and of course there’s that group that over-winters under one of the buildings at headquarters:

Diamondback behavior at dens is quite different than Arizona black behavior we discuss at SocialSnakes. While most rattlesnakes in Arizona breed in the monsoon season only, diamondbacks also breed in the spring. So you can often see courtship and combat right at their dens!

We didn’t see anything like that at the headquarters den this year, but next year we’ll be ready with timelapse cameras to catch any action.

Unfortunately for diamondbacks, not all human neighbors are as accommodating as we are at Muleshoe. Often when diamondbacks show up in a human’s yard (or from the snake’s perspective, humans show up in their territory), they are killed or translocated (moved). Translocation may seem like the humane choice, but Snake Count attendees will learn on Saturday why that may not be the case. As always, prevention is the best cure. Check out this brochure from the Tucson Herpetological Society on how to make your yard less snake-friendly (if you don’t want snakes there).

Sadly diamondbacks are also the rattlesnake most commonly collected for rattlesnake roundups. We have written a little about roundups before and a show that glorifies them. Frankly it’s too upsetting for me to say much, so I’ll refer you to Rise Against Rattlesnake Roundups if you wish to learn more about these horrific events and what you can do to stop them.

Now to end on a more positive note, here’s my favorite diamondback of all time, looking stunning. We haven’t seen Henry in a while, maybe he’ll show up for Snake Count – will you?

The is the snake that kicked off Snake Count for us last year. Jeff and I were driving through the the uplands on Muleshoe Ranch road when we saw a bright pink ‘thing’ on the road. We were both thinking it couldn’t be a snake (snakes aren’t pink?). Thankfully we realized how wrong we were in time to stop.

Coachwhips (Coluber flagellum) are a great example of how colorful snakes are. I think many people consider snakes drab because they rely so heavily on camouflage, but you can be brilliantly colored and perfectly camouflaged.

San Francisco gartersnake (Thamnophis sirtalis); you’d be surprised how difficult it can be to spot these in their habitat.

Not only do snakes exhibit brilliant coloration, but it often varies within a species. As we discussed yesterday, many snakes change color and pattern as they age (ontogenetic color change). Coachwhips do that, and as adults their coloration is so variable they look like different species. In addition to the pink variety shown above, they also come in black

and an in-between that looks like you mixed the other two varieties together.

You might expect these different color variants to be found in different habitats, but it’s possible to find all these colors in a single population of coachwhips. So why the dramatic color variation? Good question and I’d love to hear you thoughts below or on facebook.